Next stop in the Writing Process Blog Tour


I’ve been invited by children’s author, Rie Charles to participate in a unique blog tour on writing. Rie, and I practiced yoga together for a number of years before either of us got involved in the writing world. And now Rie is set to have her third children's book, A Hole in My Heart, published by Dundurn in the fall. Visit her website http://riecharles.com to learn about her writing process and to learn more about her and her books. You can also visit other authors on this tour by following the different links in each of the blogs. Enjoy.

And so to continue the tour, I will answer the four questions 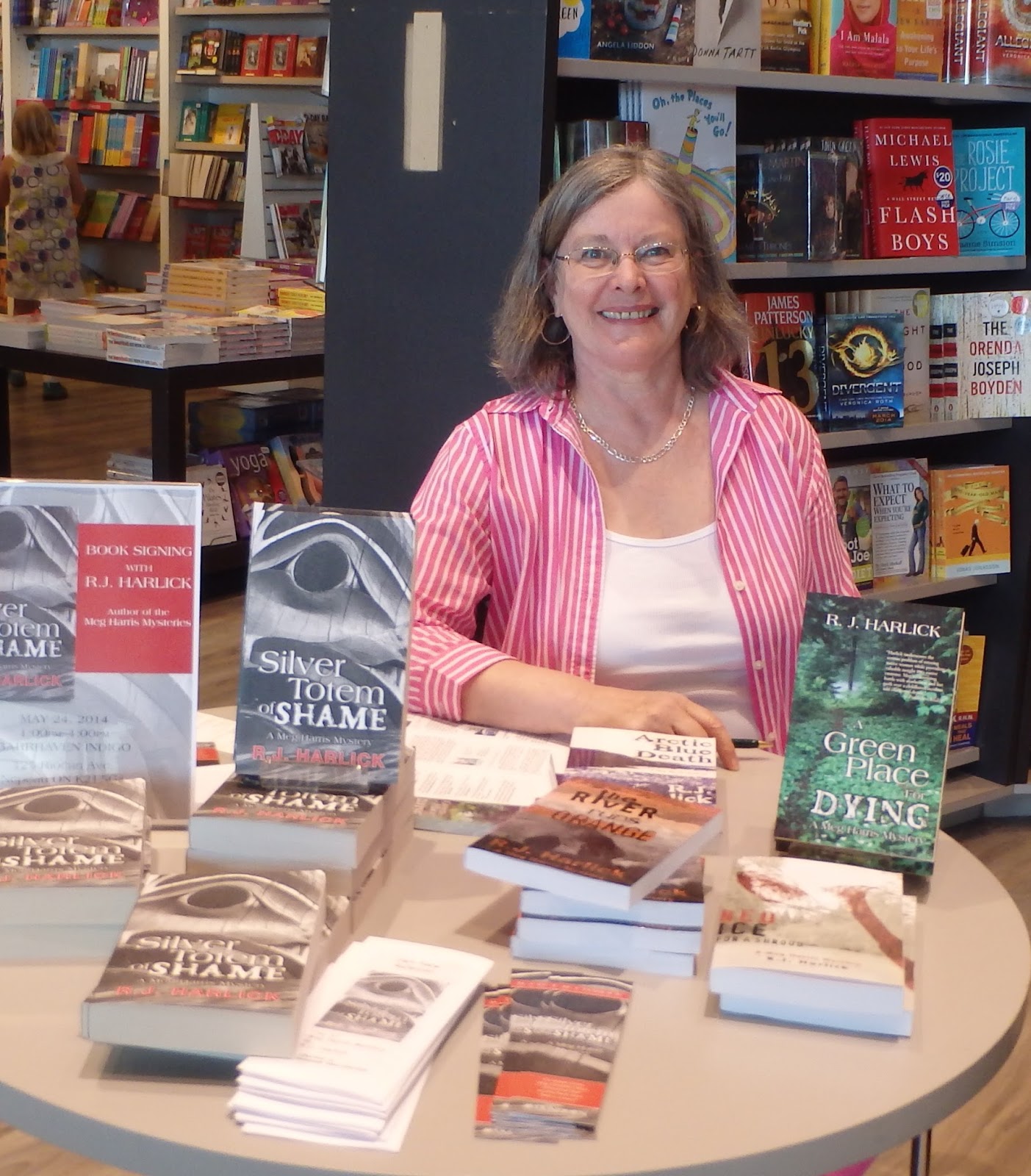 What are you working on?

I’m trying something different with the next and 7th Meg Harris mystery.  I’m putting Meg in a precarious, thriller situation.

After her adventures in B.C. in Silver Totem of Shame, she is back home in Quebec at Three Deer Point, the Victorian cottage she inherited from her Great Aunt Agatha. It’s less than a week before Christmas, Eric is away in Regina on Grand Council of First Nations business and a major blizzard has trapped her inside her house. So much snow has fallen that the roads are almost impassable, her own driveway clogged with two feet of the white stuff. Jid, the boy she rescued in Red Ice for a Shroud, is helping her get ready for Christmas. She is balancing unsteadily on a ladder trying to hang some mistletoe when a loud knock echoes through the house from the front door. On her way to answer it, the power goes off and she’s plunged into darkness….

Well….since I am about half way through in its writing, I am waiting to find out what happens to Meg too.

How does your work differ from others of its genre?

I write distinctly Canadian mysteries with distinctly Canadian stories. Because I love the Great Canadian Outdoors I want to bring this alive to my readers, so I have chosen wilderness settings, which tend to be less common in the mystery genre. While Meg lives on a remote property in the wilds of Quebec, she does travel to other wildernesses, as she did in my recent book Silver Totem of Shame, in which she travelled to Haida Gwaii in search of a killer of a young Haida carver.  Meg lives next door to an Algonquin First Nations Reserve, so I interweave their stories into the mystery series. I find writing mysteries is a terrific way to explore social issues. So in each of my books I explore issues related to Natives, issues, like missing native women, police prejudice against Natives, controversary between the archeologists and Natives over ancient human remains and so on.

Why do you write what you do?

I grew up on a diet of Nancy Drew, Agatha Christie, Sir Arthur Conan Doyle and host of other mainly British mystery writers. I’ve been gorging on mystery books ever since. When I finally made the big decision to try my hand at fiction writing, it seemed only natural that I write a mystery.  Since the mysteries I enjoyed the most involved series characters, I decided to write a series. Thus Meg Harris was born. I named her Meg, short for Margaret, after my grandmother and Harris after the street I grew up on in Toronto. Like me, she too comes from Toronto, but apart from our mutual love of the Great Canadian outdoors that is about the only thing we have in common. 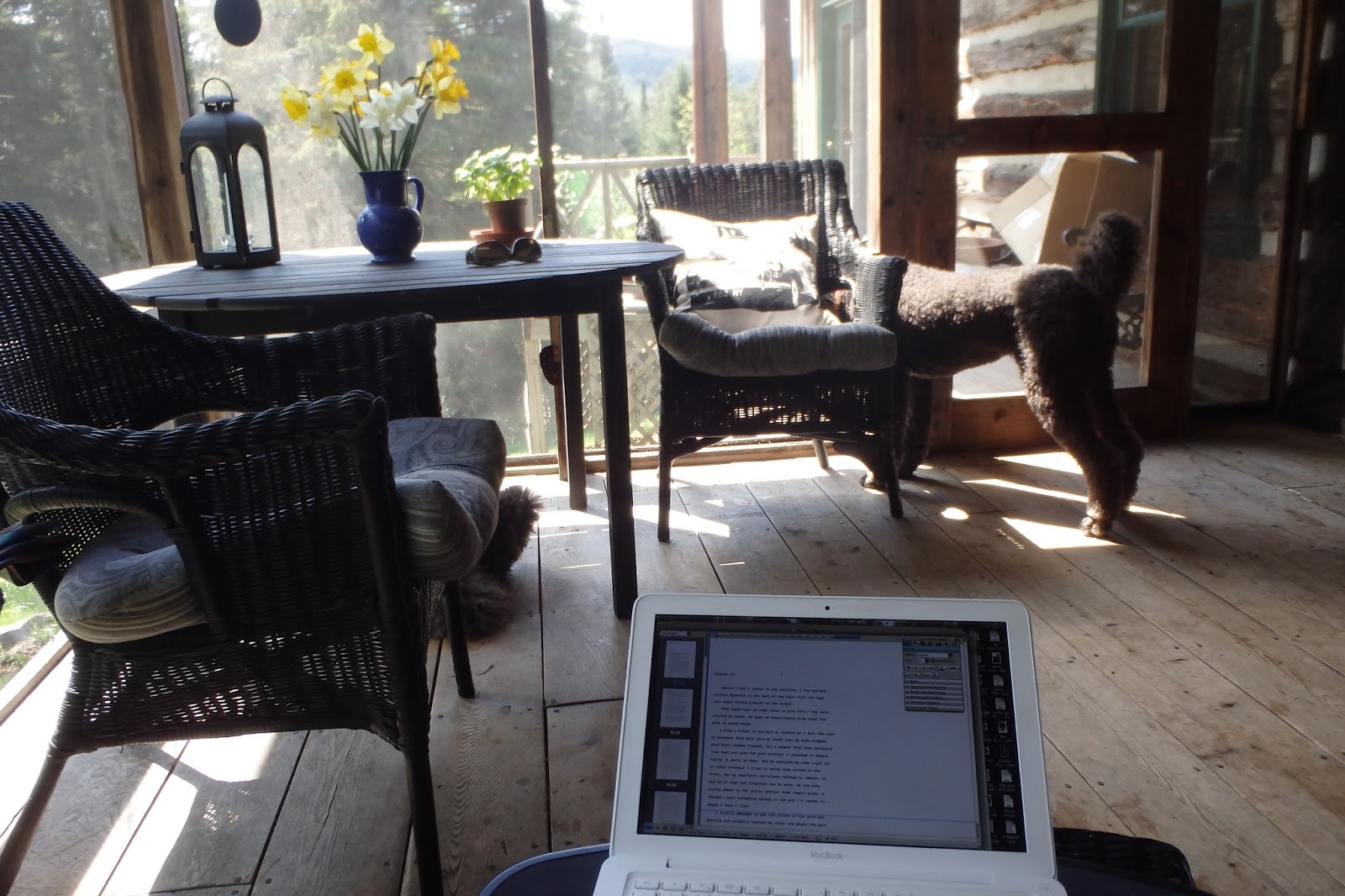 How does your writing process work?

I suppose the writing process I use can best be described as ‘writing by the seat of my pants’. I have tried outlining, but invariably found Meg sending the story in a totally different direction, so I don’t bother with an outline any more. I start with a setting, a time of year, an overarching theme, a general idea of what the story will be about and the opening scene. Since it is a series, I already know what Meg thinks and feels as well as the secondary characters. I generally pick up on Meg’s life where it left off in the previous book.

Once I have the story down in the first draft, I go through two-three revisions before sending the manuscript to my publisher. Part of the revision process includes having two to three critiquers help me see the ‘forest for the trees’. I find this a very invaluable step and invariably make key changes as a result of their observations.

I should not forget where I write. I find my writing muse at my cottage, where I can look out on the natural world that Meg also enjoys watching. The photo is of my favourite summertime writing spot inside the screened-in porch of my Quebec log cabin.

Thanks for this opportunity for me to talk a bit about my writing process. And if you would like to know more don’t hesitate to drop me a line. 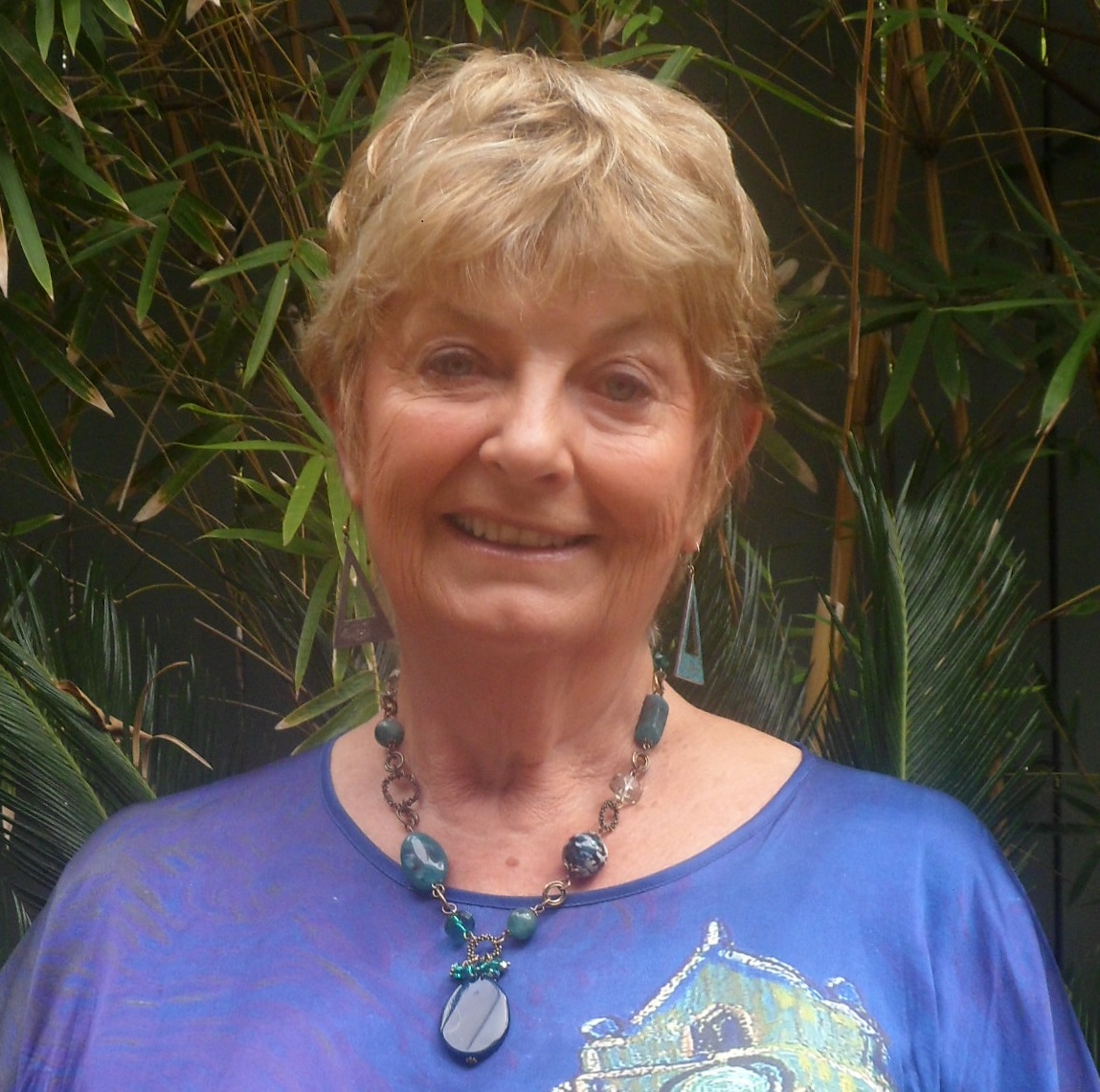 Maureen Fisher will be posting her writing process on June 2 on her blog http://booksbymaureen.com/my-blog/

Maureen is a terrific writer with a very wry sense of humour. She writes sassy romance novels containing a slice of adventure and enough steamy love scenes to drive those who to dare read them racing for a cold shower. She enjoys taking readers into another world, a world full of romance, humor, and suspense.

Mike Martin was born in Newfoundland and now lives and works in Ottawa, Ontario. He is a longtime freelance writer and his articles and essays have appeared in newspapers, magazines and online across  as well as in the  and . He is the author of "Change the Things You Can: Dealing with Difficult People" and has written a number of short stories that have been published in various publications including Canadian Stories and Downhome magazine. 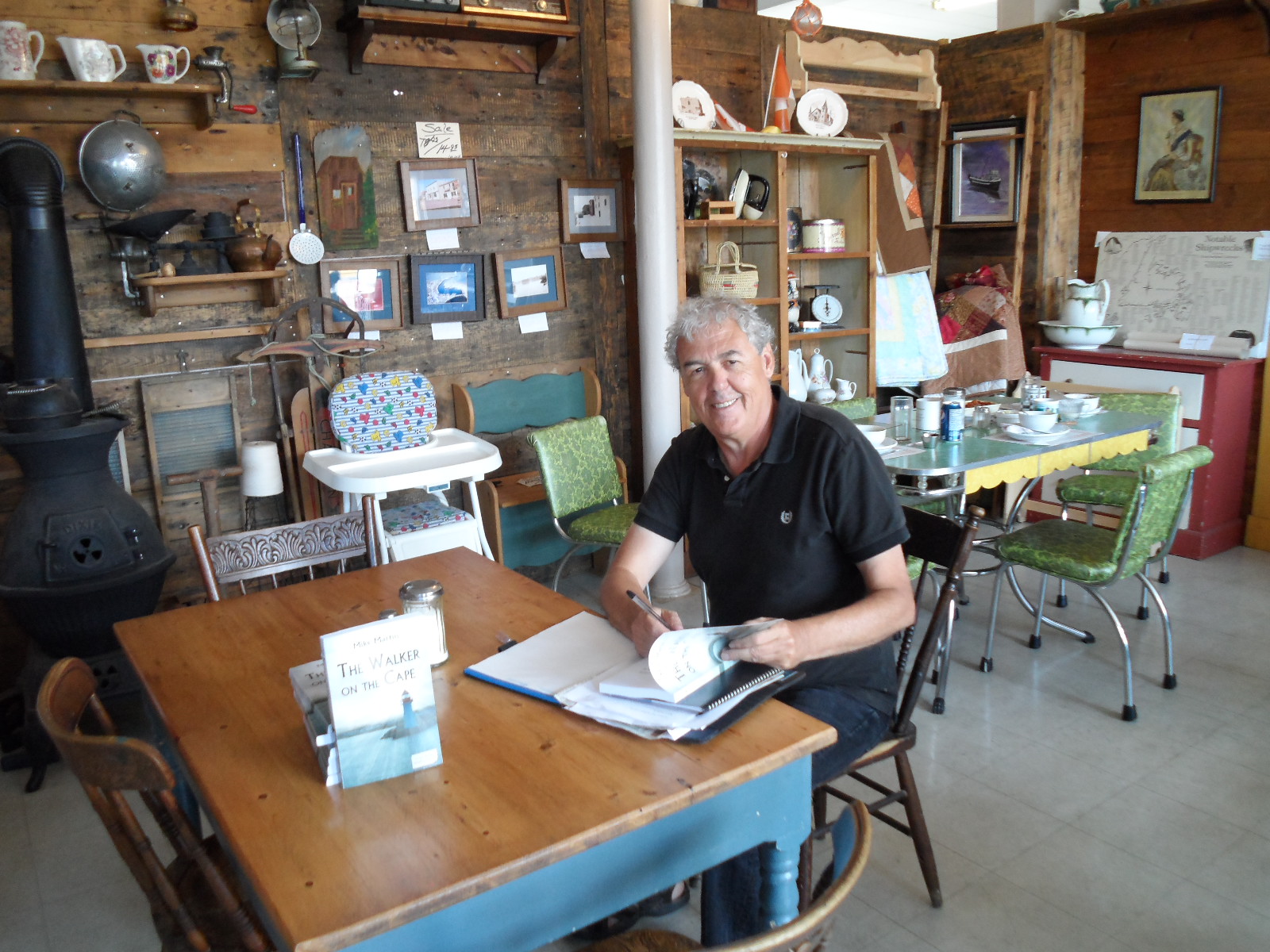 The Walker on the Cape was his first full fiction book and the premiere of the Sgt. Windflower Mystery Series. The Body on the T was the second book, and Beneath the Surface is the third installment in this series. He's having a big launch at Chapters Rideau in Ottawa on May 29 in the evening.

Like Maureen he will be posting his writing process blog on June 2 at www.beneaththesurface.co.

Be sure to put June 2nd in your schedule so you won't miss the next blogs in the Writing Process Blog Tour.

I hope you are enjoying this blog tour. Don’t forget to check out Rie Charles writing process blog and work back in time to the other blogs. You will discover new writers from many fields and revisit familiar faces.
Posted by RJ Harlick at 6:41 AM