I thought you would find my blog that was posted on Mystery Maven Canada this week intriguing, so I am reposting it on my own blog. It will give you a bit of insight on where I get some of my ideas for the Meg Harris mysteries. And if you aren't familiar with the Mystery Maven Canada blog you are definitely missing something. It is the go-to place to discover the latest happenings in Canadian crime writing.

Most fiction writers draw on their own experiences and people in their life to help create their stories and give them life. And I’m no different.  While I have never intentionally based any of my characters on family or friends, except that is for Sergei, Meg Harris’s black standard poodle who is as loving and as mischievous as on my own standard poodles, I do drawn on aspects from my own life. I thought I would share some of these with you, starting with Meg herself.
Since the Meg Harris series is written in the first person point of view, readers often ask if Meg is me. Invariably I reply “No, not really”, which is indeed the case. After all she is a red head, an escapee from an abusive marriage and she struggles with a drinking problem, none of which could be used to describe me.  But like me, she did grow up in Toronto and she has a cottage.
However, while both our cottages are made from logs and are set in the wilds of West Quebec, I gave Meg Three Deer Point, the cottage of my dreams; a large turn-of-the-century timber and stone building with a turret and wraparound verandah that is perched on a granite point overlooking the sometimes still and other times angry waters of Echo Lake. That is another fun aspect of writing fiction; you can give your characters belongings and experiences that you have only dreamed about.
In the first book, Death’s Golden Whisper, Meg discovers letters and postcards written by her Great-aunt Agatha to a friend during her grand tour of Europe undertaken shortly before the First World War. I borrowed this idea from my grandfather, who during a similar European trip sent his mother postcards of his travels. As I child I spent many an intriguing hour reading these postcards and imaging what it would have been like traveling to these exotic locations.  In the same book Meg also finds a diary written by her Great-aunt. Instead of arbitrarily using any date for the entries, I used the month and day of the birthdates of various members of my family.
I also have fun with names. Meg herself is named after my grandmother. I wanted a name that could be shortened to a number of different nicknames and Margaret fit the requirement; besides I wanted to immortalize my favourite grandmother. In Arctic Blue Death, her mother’s cook calls her Maggie, the name my grandmother often went by.  In Red Ice for a Shroud she’s called by the French version, Marguerite, which incidentally means ‘daisy’.  Her last name ‘Harris’ is derived from the street I grew up on in Toronto, ‘Harrison Rd.’
In each of my books, I also make a point of naming one or two secondary characters after my various nieces and nephews. In Arctic Blue Death, I named Meg’s father and her uncle after my grandfather and great-uncle, her sister after my mother, while I gave a fictitious Arctic town the name James Lake, after my husband. And I must not forget that one of my villains uses one of my father’s names. If he were still alive I know he would be laughing uproariously.
I enjoy spending much of my time in Canada’s great outdoors and have used some of my adventures in my books.  Red Ice for a Shroud starts off with Meg and Eric clearing cross-country skiing trails, something my husband and I, along with friends, do every fall in preparation for a winter of skiing. And I do love skiing, an activity Meg thoroughly enjoys too.
Canoeing is another matter. In The River Runs Orange Meg finds herself paddling madly down a whitewater river and she dumps, which pretty much mirrors my own experience with whitewater paddling. In fact Meg doesn’t like whitewater anymore than I do, although we both love slicing through the still, flat waters of a lake. And to give you a taste of what Meg endured when she dumped on the DeMontigny River, I've added some photos from my own dump that happened on the Madawaska River a few years ago. I'm the one in blue and my husband was in the stern. I bumped over every ledge of this Class III rapid known as The Staircase until I reached calm water. I was not a happy camper.
There are countless other instances in the Meg Harris books where I have drawn upon my own experiences, but I will save those for you to discover. 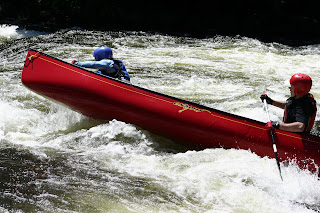 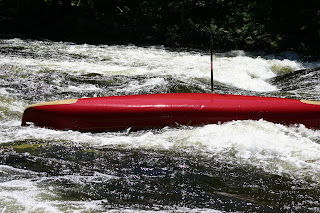 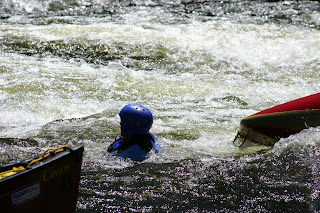 Posted by RJ Harlick at 7:56 AM No comments: