Malice Domestic and Festival of Mystery

I'm heading off to the Malice Domestic conference in Arlington Va. tomorrow with my car loaded up once again with fellow crime writers, Vicki Delany and Mary Jane Maffini and my poor suffering husband. It promises to be a whirlwind of a conference starting with the Author-Go-Round 10:00 on Friday morning. I've done this before and it's always a great hoot. Gives you a chance to spread the word about your books and to meet new readers. Then on Sunday at 11:40, I'll be participating in the panel Town and Country: how setting affects the story, a topic I particularly love.  Book signings will take place afterwards. So if you are attending the conference be sure to drop by and say hello.

The three of us then drive to Oakmont PA to participate in the Festival of Mystery on Monday, May 3 from 4:00 until I don't know when, maybe when the books sell out.  This event is put on annually by Mystery Lovers Bookshop. Tickets are available for $7 on online or at the door for $8. There are going to be over 40 authors, all frantically signing their books.
Posted by RJ Harlick at 8:30 AM No comments:

I'm thrilled to announced that Arctic Blue Death has just been shortlisted for the 2010 Arthur Ellis Award for Best Novel, Canada's pre-eminent award for crime fiction. The winner will be announced in Toronto on May 27 at the annual awards dinner. Needless to say I'm absolutely overjoyed with this recognition of the many long hours spent in front of a computer creating the world of Meg Harris. And feel particularly honoured to be in the company of such great writers as Anthony Bidulka, Lee Lamonthe, James W. Nichol and Howard Shrier.

For more information check out Crime Writers of Canada
Posted by RJ Harlick at 7:38 AM No comments:

Ottawa's Arthur Ellis shortlist event is happening this Thursday, April 22 at 7:00 pm. Please note the change in time from my earlier blog. I will be joining Brenda Chapman, Tom Henighan and Brian McIllop on the hot seat as we're grilled by journalist Kate Jaimet about our penchant for killing off people, by words that is. It takes place at the Main Branch of the Ottawa Public Library on Metcalfe St.

But of course we are only the lead up to the main event, the announcement of the shortlists for this year's Arthur Ellis Awards. I'm keeping my fingers crossed that some of my favourite writers will be nominated.

The evening will end with the shortlist announcement for the Audrey Jessup Award for Best Short Story, a local award given out annually by Capital Crime Writers.

See you there.
Posted by RJ Harlick at 7:04 AM No comments:

A harsh and brutal land

One of the reasons why Arctic Blue Death is set in Canada’s far north is because I’ve always wanted to go there. So when I was deciding the plot and setting for the 4th Meg Harris mystery, I thought what better way to see it than to have Meg go there. That way I get to go too.
A couple of years ago, during the longest days of the year, I hopped on a plane and flew to Iqaluit, where I spent several intriguing days and then onto Pangnirtung for a couple of more. Although I was a little more than seven days on Baffin Island, I came away with more than enough material, impressions and plot ideas to keep Meg busy.
It’s a harsh and brutal land and it took me awhile to appreciate its underlying beauty. As Meg keeps telling herself, I had to put aside my southern sensibilities and see beyond the dirt and barren rock to what the land had to offer. And for me, that was the people. I met some very kind and wonderful people both in Iqaluit and Pangnirtung that helped give me some insight of what it is like to live in one of the most inhospitable environments on the planet.
On the longest day of the year I was in Pangnirtung where the sun doesn’t set, but runs just below the mountain ridge on the southern shore for an hour or so before popping back up again.   No one seemed to sleep, including me. In fact at any hour of the ‘white night’ people, including kids, would be seen out walking or playing.
When I’d flown to Iqaluit, I’d had a vague idea for a plot. I knew it would be about Meg’s father, who’d died while traveling in the Arctic when she was a child, but I wasn’t sure how he had died. I just knew that something related to his death would prompt her to go to Baffin Island. While I was being shown the Iqaluit RCMP detachment by a young constable, she happened to mention one of her cold case files. It had to do with a plane that had gone missing over 20 years ago and was never seen again. The minute she said the words “missing plane” the light bulb went on. I knew I could do a lot with a missing plane and I have in Arctic Blue Death.
To learn more about my research trip to Baffin read the November 2009 issue of Mystery Scene Magazine in which I talk about my trip and how it influenced the shaping of Arctic Blue Death.
I also took many photos, some of which I include below. But I’ve also set up an album, so click here to access the album. 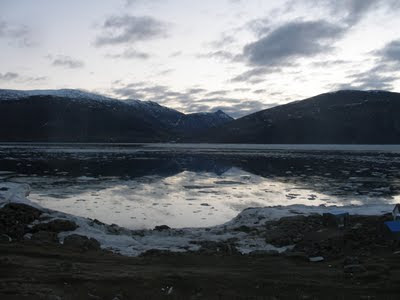 View Across the Pangnirtung Fjord at midnight on
the longest day of the year
Posted by RJ Harlick at 3:32 PM No comments:

The busy spring season is about to begin. On Thursday, April 22, I'll be participating in Capital Crime Wave, Ottawa's Arthur Ellis short list event. I, along with Brenda Chapman, Linda Wiken and Brian McKillop will be grilled by Ottawa lawyer, Kate Jaimet. It promises to be great fun. And of course we will all be anxiously awaiting the short list for this year's Arthur Ellis nominees. It starts at 7:30 p.m. in the Auditorium of the Main Branch of the Ottawa Public Library.
Then a week later, I head off to Washington, D.C., well actually Arlington, Va., for Malice Domestic, which runs from Apr. 29-May 1. It will be my third visit to a conference I always enjoy. The conference also gives me a chance to meet up with old friends I haven't seen since our diplomatic days in Washington in the 1980's. I'm quite looking forward to it.
On Monday, May 3rd,  I will join a host of other mystery writers at Festival of Mystery held every year by Mystery Lovers Bookshop in Oakmont, Pa.  I attended a couple of years ago and couldn't believe the rush of avid mystery readers intent on snatching up the latest books. It was a very busy couple of hours.
At the end of May, I will be in Toronto for Canada's own Bloody Words Conference.  I've been attending since that hot, steamy weekend, when the event began with great fanfare in the illustrious halls of the Arts and Letters Club in 1999. So this year there will be much celebration. And even though the venue quickly shifted to the air conditioned comfort of hotels, it has kept its uniquely Canadian format. It takes place from May 28-30 at the downtown Hilton Hotel. Don't miss this opportunity to mingle with Canada's popular crime writers.  Sign up now.
I hope to see you at one of these events.
Posted by RJ Harlick at 1:39 PM No comments:

A work in progress

I've had to set up a new blog, because my old one uses an outdated format that Blogger will no longer support. Unfortunately my old entries will be lost, but anything I think would be of interest to you I will include in this new blog. If there is a particular entry that you liked let me know. The old one will exist until the end of April.

It may take me awhile to get this fully up and going as I'm trying to fit this into my busy writing schedule, so please be patient.
Posted by RJ Harlick at 2:56 PM No comments: