Summer is over and I’m back in the groove with several events in the offing. In between I will be busily finalizing the next Meg Harris mystery, A Green Place for Dying, to be published next spring.
This Saturday, September 18, I’ll be at the Lyndhurst Turkey Fair held in Lyndhurst, Ontario, north of Kingston, off hwy 15. I’ll be hanging out in the back room of the Lyndhurst Library from 10:00 am to 3:00 pm with fellow writers; Rick Blechta, Susan Gates, Violette Malan, Sue Pike, Mary Mueller and Mike Harper. If you’re in the area please drop by and say hello and even buy a book or two.
The following weekend on the Sunday, I’ll be doing something I really enjoy, attending a book club meeting at Mont Cascades, Quebec. I love meeting readers and discussing my books with them.
On Saturday, October 16, I’ll be at the Thousand Island Writers Festival being held in Brockville, Ontario. This is the second year of the 2-day festival and given the exciting line-up of authors, including Charlotte Gray, Helen Humphreys, Roy MacSkimming and of course moi ;),  it promises to be a terrific event. I’ll be on from 2:00 pm to 5:00 with fellow crime writers, Janet Kellough and John Moss. Our event, called “Words and Wine II” Murder at the Courthouse is being held in the turn-of-the-century Brockville Courthouse, a rather fitting place to be discussing murder, eh?
Posted by RJ Harlick at 7:20 AM No comments:

As promised in my previous post, here are the photos of our 11 day canoe trip down the Upper Thelon River in the Northwest Territories. Ten of us, including me and my husband, Jim, and our guide Alex Hall of Canoe Arctic, took off from Fort Smith in 3 float planes and flew north-east for a little over two hours to a small lake north of the tree line, where we spent our first night in The Barrens.
The Barrens is a vast, empty land of arctic tundra, mostly flat with water making up at least 50% of an area that covers thousands of square miles stretching eastward from Great Slave Lake to Hudson’s Bay and northward to the Arctic Ocean. We were easily two hundred and fifty miles from the nearest habitation and wouldn’t see another human being for the entire trip or even a suggestion that someone else was sharing the river with us.
For the next ten days, we paddled along the mostly smooth, sometimes windy and occasionally turbulent waters of this great northern river as it passed through large expansive lakes or narrowed between banks of sand, stone and tundra. We portaged five times, averaging a kilometre in length, around rapids and one dramatic falls. We camped out on the open tundra in the full glare of the northern sun.  Several nights we camped amongst the stunted trees of eskers, the sandy remnants of glacial riverbeds from the last Ice Age.  In total we paddled a little less than a hundred miles.
While we saw only a few animals; one caribou, some fox kits and a cow moose and calf, we saw lots of birds, including arctic terns, wimbrels, parasitic jaegers, bald eagles, Bonaparte’s gulls, Canada geese, common loons, red throated loons, a yellow billed loon, willow ptarmigan, Harris sparrows and Lapland longspurs to name a few.
I must not forget to mention the weather, after all I’m Canadian. It was fabulously hot and sunny for all but one day of rain and another windy, cold day that reminded us that we were indeed North of 60.
By the way, I must've killed a million black flies.

And if you think this canoe trip won't provide fodder for another Meg Harris murder mystery, think again... I am, after all, a crime writer. :)
You can see the photos here. And if you want to learn more about our trip, please read the previous post. 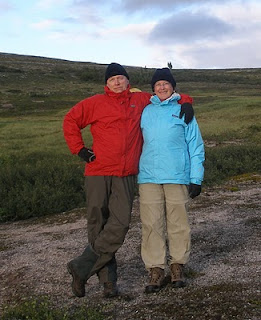 Posted by RJ Harlick at 5:47 AM No comments:

Summer has come to a sudden chilly end with a cold drenching rain. I even put a fire on last night to banish the chill from the air. But what a glorious summer it has been. Endless days of hot, lazy, sun, one for the memory banks.  And I got to do what I love best, roaming the Great Canadian Outdoors.
I spent three weeks with my husband north of sixty in the Northwest Territories, a week and a half of that paddling through the Barrens on one of the great northern rivers, the Thelon. A memorable experience shared with eight other paddlers, including our guide, Alex Hall, a man who has spent more than thirty-five years paddling the Barrens intricate waterways.
It was our first time in this vast empty world of big sky, tundra, rock, sand and water with only the occasional fringe of stunted trees and we were in awe. Rising hills of golden sandy eskers shone in the sun. Arctic terns cavorted around us. Flocks of geese fled at our sight. A lone caribou watched transfixed as we silently sliced through the water towards it. Paddling through crystal clear water, over shimmering green water grasses wavering in the river’s strong current, like the tresses of some mythical mermaid.
We often came across the tracks and spore of animals that had tread before us;  wolves, caribou, moose, muskoxen, fox and geese. We even found the occasional set of bleached caribou antlers. But only twice did we see evidence that man had once roamed this barren land and these were old, very old; an ancient stone caribou fence more than a thousand years old, a prehistoric stone arrow and tent poles at least a couple of hundred years old. This is not a land where man can easily survive and in years past the few that tried often starved to death. But today no one lives in the thousands of square kilometers that make up the Barrens.
It takes a long time for wood to decay in the sub-arctic, the same way that it takes a very long time for plants to grown. In the harsh climate, where winter reigns 8 months of the year, a hundred year old tree is less than 10 feet tall with its trunk only 4 inches thick and plants are only a few inches high. But they sure can produce fabulous berries. We snacked on bearberries, cloudberries, bill berries, crowberries and cranberries. It was a veritable feast.
Sadly we saw only a handful of animals. Ten years ago these lands overflowed with the 200,000 strong Beverly herd of caribou. Today it is estimated less than 2,000 survive and no one knows why. They only know that few young are being born or are surviving to adulthood. And with the decline of the caribou comes the decline of the arctic wolf.  We’d also hoped to see the mythical muskoxen that have made these Barren lands their home since prehistoric times, but again we saw none.  But we don’t know whether it was because their numbers are down too or they were just being shy.
We’d come prepared for chilly arctic weather and were warmed by hot southern temperatures instead. It was rather nice, except it did bring out the bugs. And if there was one aspect of the trip I didn’t like it was the bugs, relentless, ravenous, flesh eating blackflies that forced us to flee to our tent or encase ourselves in bug juice and bug jackets. They crawled over everything and flew into every orifice and cranny. They were awful. Only on the open water were we really free of them.
But the white nights were magical. At 9:00 at night, the sun was still high in the sky. By 10:30 it was setting only to return at around 3:30 a.m. It never really got dark, just a greyish twilight. Needless to say we made little use of the headlamps we’d brought.
I have loads of photos and when I finally manage to upload them to an album I will do a link. Until then enjoy one of my favourites taken at around 3:30 a.m. of a setting full moon in the pink sky of the rising sun. 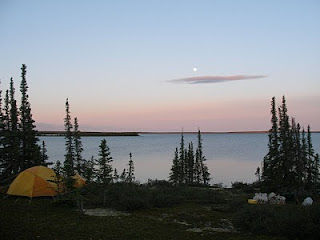 Posted by RJ Harlick at 6:46 AM No comments: