The next Meg Harris mystery 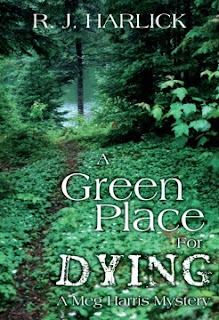 Whew… I’ve done it. I’ve finally sent A Green Place for Dying off to my publisher.  I feel as if a tremendous weight has been lifted from my shoulders. But I tell you after living with Meg, her cast of supporting characters and her adventures for the past year and a half, I feel a bit lonely… and bored. Now what do I do? On to the next Meg Harris mystery…  or should I do something else….?
I am very excited about A Green Place for Dying. In this 5th book in the Meg Harris mystery series, Meg returns to Three Deer Point after her trip to the Arctic, only to discover that the daughter of a friend has been missing from the Migiskan Reserve for over 2 months. Treating her as a runaway, the police refuse to do little more than a nominal search and continue to stall even when the girl’s friend turns up murdered.
As the mother struggles with her daughter’s disappearance, Meg vows to do what she can to find her and in the process uncovers an underside of life she would rather not know existed. And when the search takes an unexpected turn, Meg is forced to finally face her own demons and admit to the guilt she’s been hiding since a teenager.
In this latest Meg Harris mystery not only do I explore a major issue in Canada, that of missing aboriginal women (currently over 560) with little or no attention paid to their cases by police but I also delve into guilt and the detrimental impact it can have on shaping people’s lives.
Although A Green Place for Dying won’t be in bookstores until May, it is available for pre-order on online bookstores.
Posted by RJ Harlick at 10:00 AM