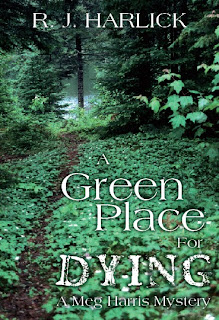 
A Green Place for Dying is about a growing issue in Canada, that of missing aboriginal women. Currently there are over 580 missing and murdered women and little is being done about it.  Sisters in Spirit, an organization associated with Native Women’s Association of Canada has been spear heading a movement to raise awareness of this alarmingly high number in an attempt to ignite police and other authorities into action.  In my own small way, I hope by making missing native women the central theme of this book, that I too might contribute to the raising of its profile.
In A Green Place for Dying, Meg returns to Three Deer Point, her wilderness home in West Quebec, to discover that the daughter of a friend has been missing from the Migiskin Reserve for over two months. Treating her as a runaway, the police refuse to do little more than a nominal search and continue to stall even when the girl’s friend turns up murdered.
As the mother struggles with her daughter’s disappearance, Meg vows to do what she can to find her and in the process uncovers an underside of life she would rather not know existed. But the search takes a turn, which forces Meg to finally face her own demons and admit to the guilt she’s been hiding since a teenager.
A Green Place for Dying is due out next Spring and I’m looking forward to meeting you on another round of book events and store signings.
Posted by RJ Harlick at 7:10 AM